January 2022 by dtesseris in Blog 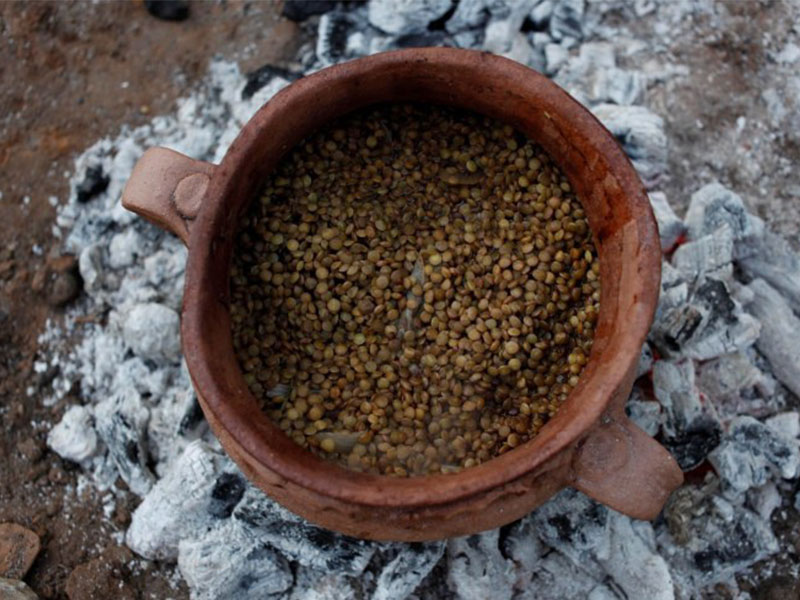 Capers, honey, plant bulbs, olives, coriander, seafood, pork and wheat are some of the ingredients that Minoans used in their cuisine. Archaeologist Jerolyn Morrison explains what the ancient Cretans ate and reveals her own Minoan recipes.

Unfortunately, there are no texts referring to the Minoans’ culinary habits, due to the fact that the Minoan civilisation was prehistoric. Archaeologists are studying finds, such as food remains found in earthenware storage vats in Minoan palaces, architectural sites, the colour and texture of the soil, paintings preserved on pottery and murals, as well as stone tools and various types of ceramic objects. Throughout archaeological studies of the Minoan civilization, there is evidence supporting the use of legumes and herbs, the use of oil, honey, as well as sea salt harvesting. The use of Coriander is mentioned both as an herb and as a spice. In archaeological sites where bones, seeds and shells have been well-preserved, we find that the diet of the people of Minoan Crete included plenty of seafood, fish and meat. Archaeologists are also examining Cretan hieroglyphics, as well as Linear A and Linear B. All these findings have helped us establish that the Minoans usually cooked in common spaces, where other activities also took place and that they cooked in tripod cooking pots. These cooking utensils found appear to be suitable for slow cooking all kinds of soup. For several years now, through “Minoan Tastes”, I have been composing “Minoan flavors” according to my own interpretations of the aforementioned archaeological findings, following years of rigorous study. Bellow, I have listed 3 of my Minoan recipes, which are delicious and very easy to follow, so that you can create a special menu with a taste of Minoan Crete.

Preparation: Put all the ingredients –apart from the trachanas, the sage and the thyme– in a terracotta casserole and cover it with the lid. Place the casserole in a preheated oven at 180°C and roast for 3 hours. Remove the casserole from the oven and add the trachanas. Cook for another 30 minutes and then, a few minutes before removing, add finely chopped sage or thyme, or both.

Preparation: Place the cleaned octopus in a terracotta deep-dish and braise it in the oven until it becomes tender and takes on a dark pink colour. This usually takes several hours. When it is ready, you can leave it as it is or dress it with the honey balsamic vinaigrette. Add fresh thyme or finely chopped spring onion. Add a little fresh Cretan olive oil before serving.

Ingredients: Brown lentils, water, coriander seeds, whole or chopped (depending on how fragrant you want them to be), onion or leek, and wild garlic.

Preparation: Boil the lentils in a terracotta pot on medium heat for 45-60 minutes. Once the lentils have the right colour, add the following: Fresh herbs (thyme and / or oregano), 1-2 bay leaves and honey. Continue cooking for another 15 minutes and remove from the heat. Before serving, add fresh olive oil and sprinkle with sea salt. You can also add a little vinegar to enhance the flavours.

Jerolyn Morrison composes her own “Minoan flavors”, drawn from interpretations of archaeological finds, which she has rigorously studied.

More about the founder of Minoan Tastes HERE

Jerolyn Morrison’s Speech at the Museum of London

Presentation of the project ‘The Weavers of Crete’ in Heraklion