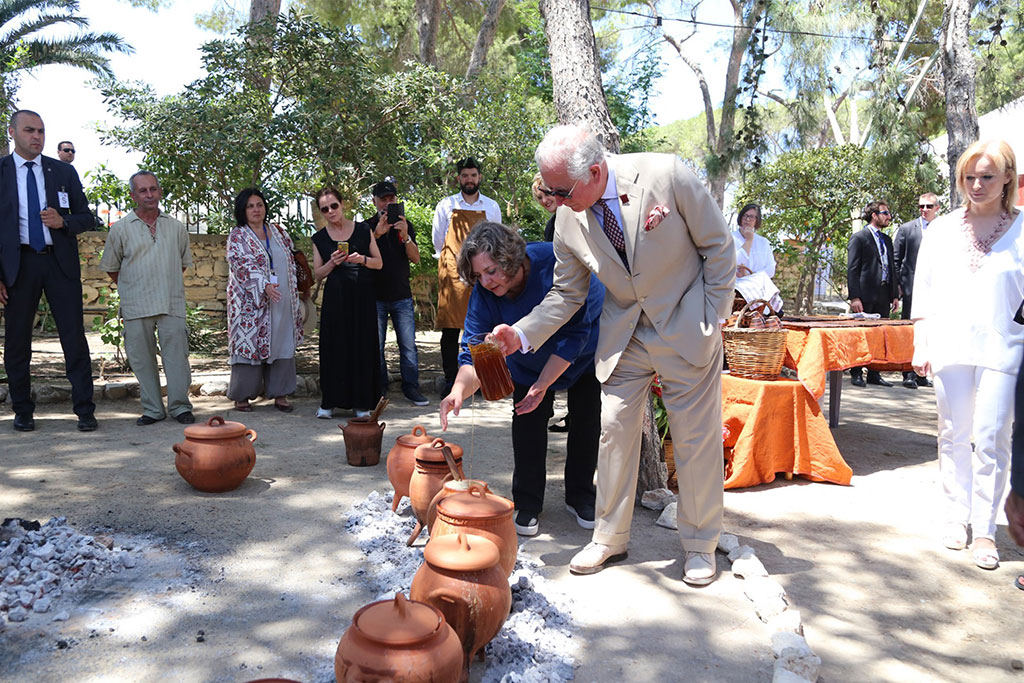 HRH Prince Charles of Wales graced the “Cooking Like Minoans” event with his presence in a cheerful and friendly spirit. Adding honey to a tripod cooking pot where lentils with coriander had been simmering since early morning, he was introduced to Minoan cuisine, contributing his personal touch to the ancient dish. Guided by Dr Jerolyn Morrison, founder of the “Minoan Tastes” programme, he attended part of a session of Minoan culinary practice revival, which took place in the garden of the Knossos Research Centre of the British School at Athens, in Crete. His Royal Highness was greatly intrigued by the seeds that exist since antiquity and took a particular interest in olives, oil and mushrooms, some of the historic ingredients which were integral to Minoan culinary practices.

The event was inspired and organized by the Greek cultural organization, Branding Heritage, along with the British School at Athens and the Region of Crete, acting as co-organisers. HRH the Prince of Wales was accompanied by the Hellenic Minister of Culture, Lydia Koniordou, the British Ambassador, Kate Smith, the Director of the British School, John Bennet, and the Curator of Knossos, Kostis Christakis, among others. HRH was received by the representatives of the British School, Chryssanthi Papadopoulou and Evangelia Kiriatzi, as well as the founder of Branding Heritage, journalist Katerina Frentzou, who offered him a replica of the Malia Pendant.

HRH Prince Charles of Wales was also welcomed by the other participants of the two-day cultural event “Contemporary Minoans”, which started on that day (11/05/2018) in the Knossos Research Centre, and was continued at the Heraklion Archaeological Museum the following day. Some of the participants included the Governor of the Crete Region, Stavros Arnaoutakis, Marianna Vardinoyannis, Mareva Grabowski-Mitsotaki, distinguished journalists and well-known designers, such as Sophia Kokosalaki. Dressed in a spring suit, with the legacy pin of the British School at Athens on his lapel (as Patron of the school), HRH the Prince of Wales conversed with many of the artists, entrepreneurs and journalists present. He had previously visited the Palace of Knossos accompanied by his wife, Camilla, Duchess of Cornwall. The trip to Crete thus completed the princely couple’s three-day official visit to Greece. For more information on Ellis Keys’ text click HERE 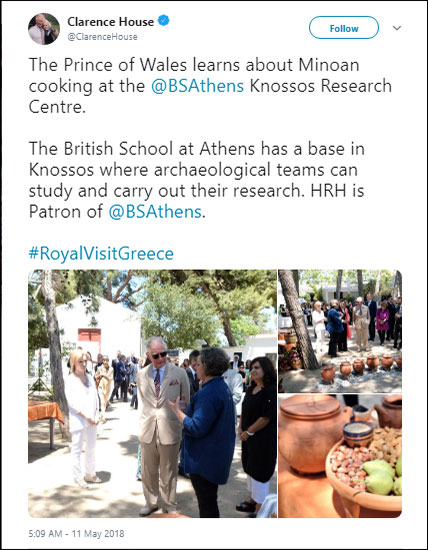 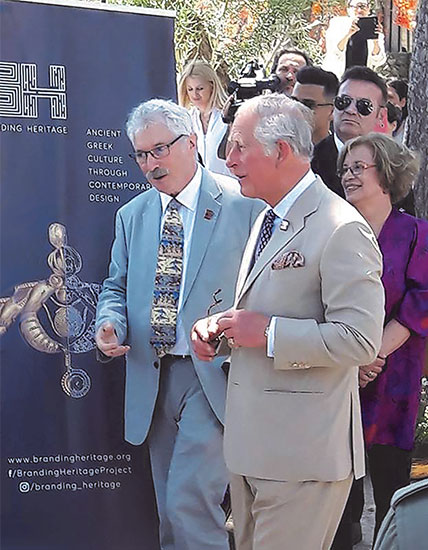